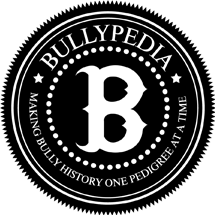 BullyPedia started its journey in late 2009 as a hobby project by  Mr. Randy R. Soriano.  Randy is a  2001 graduate of ECPI College of Technology where Mr. Soriano received his Associates Degree in Computer Science with a concentration in Web Development. BullyPedia Pedigrees went online pedigree database was officially launched on April 10th 2010 and went viral within the American Bully community. Within the first 6 months, BullyPedia garnered 8,000 members almost overnight. Since then, BullyPedia continues its’ rapid growth with the support of its members and community.

Contributions to the breed

BullyPedia Certified Pedigrees has collected, maintained and managed over 200k online pedigrees providing value to its members by way of “fact checking” printed documents and publishing its certified pedigrees to our members. As of 2017, BullyPedia offers  DNA Profiling, Microchipping and many other services.

BullyPedia’s averages 100k unique visitors and 2 million page impression a month making BullyPedia one of the most visited canine pedigree website in the world today. BullyPedia continues to promote it’s product & services throughout the U.S. and abroad while holding steadfast to its core value of putting our dogs first and foremost.